Soap in America: A Brief History [Plus Science Experiments]

Wash your hands! Sound familiar? This is a lesson we learn from an early age. Scrub thoroughly with soap for at least 20 seconds regularly to keep clean and healthy. This lesson feels particularly relevant now in light of the COVID-19 pandemic.

Soap is generally a ubiquitous part of our day and many of us likely use it without a second thought. Perhaps we have taken soap for granted in the past as it was easily found in every grocery store in almost any variety. This was not the case for much of American history.

Wait a minute….why are we talking about soap? Well, before the pandemic reached our community, we were planning an interactive Hands-on-History program all about soap! While we cannot gather together to discover how awesome soap is at this time, we can still share the fun through this blog post! Here’s a little bit about how folks made soap in the past. We’ve also included soap-making tutorials, recipes, and fun experiments you can do right at home!

For a lot of families in North Carolina in the mid-1800s, like the McCowns of the West Point Mill community or the Leigh Family of then Orange County, buying soap may have seemed frivolous when they could simply make their own. But what did people use to make their soap and what did the process entail?

During Colonial times (from early 1600s-1763) in America, soap was considered a luxury item. The English government heavily taxed soap sales and that led royal governors in American Colonies to do the same. Perhaps Colonists wondered, why pay extra for something that could be made at home? They began to experiment with ways to make their own soap rather than purchase the expensive imported varieties. A mixture of trial and error, not doubt, and old wives’ tales resulted in a recipe for soap in America that remained fairly consistent for centuries.

Soap was traditionally made from three basic ingredients: 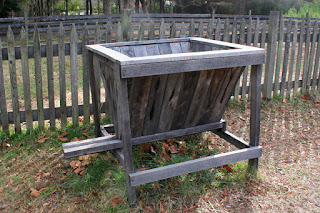 The art of turning ashes into lye took some refinement over the years, but the ash hopper became one of the most convenient and popular tools for completing the task. The ash hopper was essentially a large wooden funnel or trough with a spigot coming out of the bottom and leading to a bucket.

The image on the right is an Ash Hopper at Bennett Place State Historic Site in Durham, NC. For more information about this historical site, visit their website.

Many families used homemade soap in the first centuries of American history, but who was making it? Well the simple answer is, a lot of different people were. In the 1600s and 1700s there were tradesmen called soap boilers who made and sold soap throughout urban areas. One such soap boiler was Josiah Franklin, Benjamin Franklin’s father. In rural America, soap-making was considered a woman’s job. Women would make soap annually or semiannually to provide for the family’s washing needs throughout the year. On plantations and farms where enslavement was present, some enslaved women were washerwomen. Their work would have included soap-making, likely using skills and techniques passed down through generations. A variety of people made soap in America before widespread commercialization, but the process and ingredients used to make the soap were very similar.

Folks used this soap for everything from their own bathing needs (usually no more than once a week), to cleaning laundry and dishes, and even to washing floors. In other words, this was an all purpose soap! A bit different from our shampoo and conditioners, laundry detergents, dish soaps, and anti-bacterial hand soaps of all varieties today. 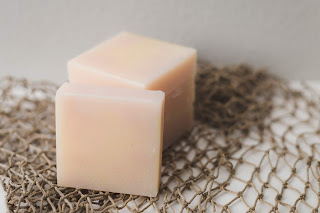 The soap we are familiar with today has undergone a vast evolution from the traditional form that Americans used for centuries. Today most people do not make their own soap, barring small business endeavors, craft projects, or perhaps DIY challenges. While mass commercialization of soap has negated the need to make our own soap, it is interesting to look back at what used to be a routine process. It is still possible to make lye soap, just remember that lye can be very dangerous if not handled properly. If you would like to try making your own homemade soap using lye – always wear gloves and goggles, find a recipe from a reputable source (see an option below), and follow all directions closely. Whether you try the more traditional early-American soap recipes or stick with your favorite brand from the store – just remember to wash your hands!


Learn More about the History of Soap