August 14, 2020
By: Shannon Mallery, Program Assistant Sr. - Mature Adults
This is the second week of the Play With Me: Action series. This week we will focus on silly party games that will have your little one dancing and making odd noises. Oh don't worry, you will be making odd noises too!

These activities are designed for children between 2 and 5 years old. Before getting started, parental assistance will be needed to help collect and setup supplies. Consider sending the supply list ahead of time so the parent can prepare in advance. This week's theme is: Party Games

Supplies/Setup
This activity is a simple game of See and Say and maybe Do. Once you have printed the Animal sheet cut on the dotted lines to make animal flash cards. 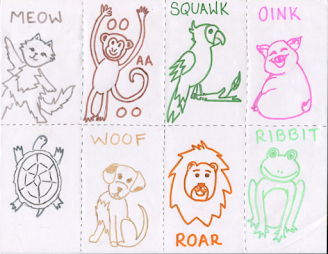 Your child will also need a set of animal flash cards.
Among the animal cards there is one wild card, it is the turtle as far as I know turtles do not make a sound (I did not thoroughly research this however and could be very wrong). So for this card make any noise you want, it can be a sound you think that turtles make when they eat or move. But it can also be a sound they would never make like a door bell ringing.
For this game do whatever is fun. The rounds are just suggestions for playing. Feel free to let the game take you where it will.
Activity #2 - What's under that Hat?
Supplies/Setup
This is a very silly game that will require you to pretend you DO NOT know what your little one is talking about! Come to the screen for your call already wearing this next activity. On your head you will place the four rolled up sock pairs. In between and in the sock rolls place your (about seven) items. Position the socks so that they are noticeably piled up on your head. Put the scarf over the sock rolls and items and tie the scarf at the base of the back of your head. Pin your hat to the scarf on the top of your head. When your child asks what is on your head pretend you have no idea what they are talking about and say something like "oh what do you mean?" When they ask again feel around on your head and pull out one of your objects and say "Oh you must mean this" .  They will probably keep asking until you have no more items hidden in the socks. The items can be just silly or things you want them to see like a photo of the two of you together.
Practice this game before your call so that you have a feel for how to fish out the items so that everything does not just fall out/off. When executed well this is a super fun and silly game. If you have a rubber chicken I would highly suggest using it for this game!
I hope you had fun with this week's Play With Me: Action series party games. Next week we will get very mysterious. Stay silly and remember to Play More with DPR!